A French Group with large interests in palm oil and rubber plantations in Malaysia decided to look for agricultural investments in East Africa. In February 1950, they sent their agent, […]

END_OF_DOCUMENT_TOKEN_TO_BE_REPLACED

A French Group with large interests in palm oil and rubber plantations in Malaysia decided to look for agricultural investments in East Africa. In February 1950, they sent their agent, Mr. Jas Nicoll, with a comfortable chequebook and a very large mandate (any country and almost any crop) to East Africa. Very quickly he came to the conclusion that an investment in coffee plantations in Kenya was the answer to his quest.

In a few months, he managed to set up a company (Socfinaf) and acquired the first coffee estate in April 1950. It was N’gewe Estate. Jas Nicoll acquired the neighbouring Mchana Estate in May of the same year. Mchana – with 1,090 acres, 659 of them under coffee – was already one of the larger estates in Kenya. In January 1951 he managed to acquire two other estates close to Mchana and N’Gewe. Kiki Estate and Mukuyu Estate (325 acres with 136 acres under coffee) were added on.

The four estates were regrouped into one entity, called Mchana (seeing as it was the largest of the four units). By doing so, Mchana Estate became the largest single coffee plantation in the whole of Kenya and was in “full bearing”. In 1950, the newly created Socfinaf produced 267 tons of clean (or Washed) coffee and 21 tons of Mbuni (as natural coffee is known) out of 9,700 tons produced that year in Kenya. In 1950, the yield was 450 to 500 lbs an acre as against an average of 250 lbs for the whole of Kenya. 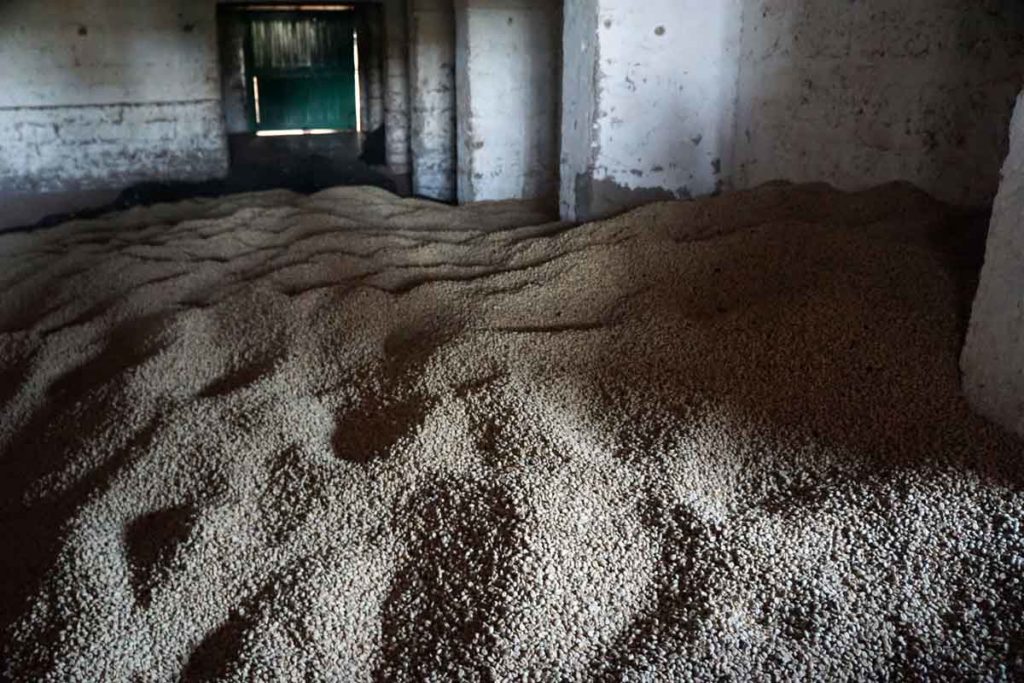 Coffee Resting before bagging at Mchana

Today’s Mchana Estate is 906 hectare with 458 hectares under coffee – almost the same original amount of hectare used to grow coffee as in 1950, making it one of Kenya’s largest.
The potential for high quality, however, was there and was part of the heritage of the farm. 2/3 of the trees still bearing at Mchana were planted before Socfinaf’s acquisition, and they are mostly SL28. Small subsections of the farm have been planted under Ruiru 11 and K7 , but the majority of cultivars are the ‘traditional’ SL28 & SL34, known for their great cup profile. Indeed, all the potential for exceptional quality has been there from nearly the beginning – it just needed a helping hand.
Coffee Management Systems (CMS), one of Kenya’s premier marketing and agricultural extension services, took over the farm from Socifaf management in late 2017, and they are making the most of that potential. Today, Mchana’s management has been placed safely in the hands of Mr Wambungo. He is an innovative and expert farm manager and is committed to maintaining Mchana’s reputation as one of the best producing estates of in Kenya while also adding ‘best quality’ to that reputation.
Mr. Wambungo began immediately with renovation activities: old trees were pruned or replaced so as to ensure a better harvest in a couple of years’ time. He has implemented crop development charts, which track each block from flowering to maturity. Mr Wambungo’s efforts are already seeing results. Productivity has increased significantly, and lots from Mchana now fetch good prices at auction. The farm is expected to continue to improve as his expertise is put into effect.

AB – In the cup expect orange rind, cranberry and blackcurrant flavours with a fruit nectar, heavy body. This coffee is versatile and suitable for all brewing methods.

PB- In the cup expect cranberry, black currant and orange flavours with a heavy, syrupy body. This coffee is best suited to espresso, siphon, plunger and pourover.

Enjoy a cup at Origin in De Waterkant and Bree. Grab a bag of beans for your home or office. View our full coffee offering here.